Skip to content
It’s neither a spirit, a wine nor a beer … So what is genuine Japanese sake?

It’s neither a spirit, a wine nor a beer … So what is genuine Japanese sake?

Japan’s national drink may well be enjoying increased popularity worldwide, with almost universal recognition of the word ‘sake’, it remains plagued by countless uncertainties and misconceptions. Both the general public and members of the trade remain unsure as to what real Japanese sake is.

A case in point is Europe, where sake is still too often mistaken for spirits, post-prandial drinks and other spirits of Asian origin, particularly Chinese. In the United States, there is a tendency for people to automatically take the simplistic view that good sake is drunk chilled and that all bad sake is drunk hot, when in actual fact, serving temperature does not depend on the quality but on the type of sake. 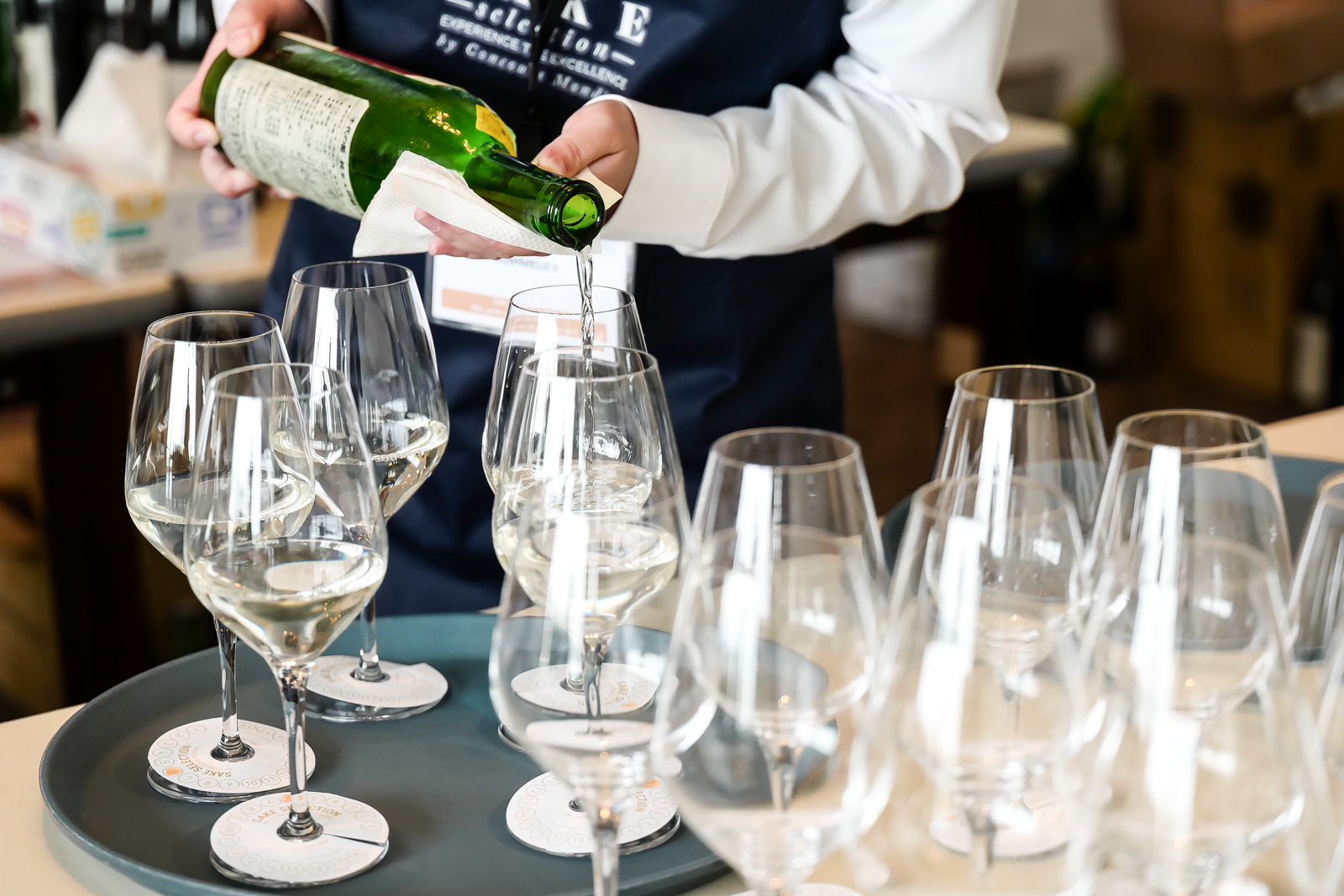 Before explaining what sake is, it is always essential to specify what it is not

Genuine Japanese sake is not a spirit. It is not produced through distillation, like gin, vodka and whisky, for example. Its alcohol content virtually always ranges from 14 to 16%, and can never exceed 20%. In fact, over the past few years, sake with a lower ABV of around 7 to 12% has even emerged in the marketplace. Too many Asian restaurants (some of them even serving sushi) have encouraged the confusion, particularly in most European countries, by serving their patrons an after-dinner drink they call ‘sake’. The drink bears no relationship with real Japanese sake and is often not even rice-based, and yet the word sake is a Japanese word. Also, many distributors and magazines present sake in the ‘spirits’ section of their catalogues or magazines, because they don’t have a specific section for it.

Because Japanese sake is not distilled, it should not be considered a spirit. It belongs to the same family as wine and beer though is neither one nor the other. The term ‘rice wine’ or ‘rice beer’, that is sometimes used, is improper and also creates confusion. Japanese sake is produced from different ingredients and using a specific process that is quite different to winemaking or beer brewing.
In Japan, sake (“nihonshu” in Japanese) is defined by a set of legal and technical rules that regulate what is and is not sake. Although in most countries around the world, the same rules are generally applied, it is still possible to find products called sake that would not be entitled to the name in Japan.

This is true, for example, of sake flavoured with Japanese plums or yuzu (ume-shu or yuzu-shu in Japanese) which are no longer eligible to be called sake or “nihonshu” when fruit is placed in the tank. In fact, a large share of these products is made from a spirit base (shōchū) and not sake. The same is true of other products sold as sake which in fact have more in common with cocktails or pre-mixed drinks than with the real McCoy.

Caution should therefore increasingly be exercised regarding use of the term sake around the world. Just having sake as one of the ingredients (or sometimes even just rice) should not make the finished drink eligible to be called sake. Unfortunately, legislation, but also distributors outside Japan, do not necessarily always take these basic principles on board.

Because the solid ingredient in sake is a cereal – rice – an external supply of water is essential. The quality of the water, which represents about 80% of the finished product, is therefore critical. Although the concept of “terroir”, sometimes used nowadays for sake, can be used to mean many different things, I often say that the true “terroir” for sake is spring water.

The other basic ingredient, rice, uses varieties specifically developed for high-end sake and food-grade varieties for most of the others. It is used in two forms: simply steamed (kake-mai – 80 to 85% of the rice) or steamed and then turned into kōji rice (kōji-mai – 15 to 20% of the rice, providing a source of various enzymes essential for the rice to break down) by a microscopic fungus: kōji-kin.

There are more than a hundred varieties of sake rice. The best known is without doubt “Yamada Nishiki”, then “Gohyakumangoku”, “Miyama Nishiki”, “Omachi”, “Hattan Nishiki” and “Ginpū” rice to name a few. For each batch, one or two varieties of rice are used (on very rare occasions three) but no more, and they may have different degrees of polishing.

The sake production process and the end product

A specific method is used for producing sake (kamosu in Japanese), and provides the solution for a twofold problem: the absence of directly fermentable sugars in rice (whereas in winemaking, grapes are a direct source) which requires the starch to be broken down into basic sugars; and the use of white rice rendering prior germination impossible (in beer brewing, forced germination produces malt whose enzymes will transform the starch into various sugars).

For sake, these two processes (breaking down the starch into carbohydrates and turning those sugars into alcohol) take place concurrently, in the same tank, whereas for beer brewing they are carried out in two stages. These multiple, parallel fermentations are what makes sake production unique and imbue sake with all its complexity.
Numerous steps prior to fermentation and then afterwards complete the process and enable producers in Japan to produce tens of thousands of different batchesevery year.

Most sake is matured using a process that removes almost all the colour (which unfortunately tends to add to the confusion with brandies or other colourless spirits). Unlike beer, and with a few rare exceptions (due to gas residue at bottling, inputs or deliberate resumption of fermentation like Champagne), sake is usually not sparkling and has a much lower acidity (about 5 to 7 times) than wine.
Adding water before bottling usually brings the alcohol content down to around 15%.
With a few exceptions, sake has a shorter optimal maturation phase than wine, in tanks or bottles, lasting less than a year (sometimes two) and is marketed by the producer when at peak freshness and ideal for drinking. It must therefore be drunk within the year.
Some sakes are simple and straightforward, while others, such as high-end sakes that have been in vogue since the second half of the 20thcentury, can develop substantial complexity on the nose, on the palate, or both. The strength of the flavour and aroma of the rice may vary in the most traditional sake. More modern styles show a wide range of fruit, flower, spice and undergrowth aromas, for instance, that can be similar to those of wines, but also display aromas to which Western noses are more unaccustomed.

The official classification system for sake is not based on geographical origin as for PDOs. Rather, it refers to the quality of the ingredients (certified rice) and the procedures applied to them (the degree to which the rice is polished, the addition or not of small amounts of neutral alcohol for quality reasons, etc.) or banned (no preservatives, sugar or any other flavour modifier added).

Only about one third of production meets these stringent criteria, which allow these premium sake (the term in Japanese is specific designation sake or ”tokutei meishō-shu”) to qualify for one of the 8 defined grades (i.e. 8 grades divided into 2 groups of 4 grades) as shown in the diagram below; the remainder is considered as ordinary sake. 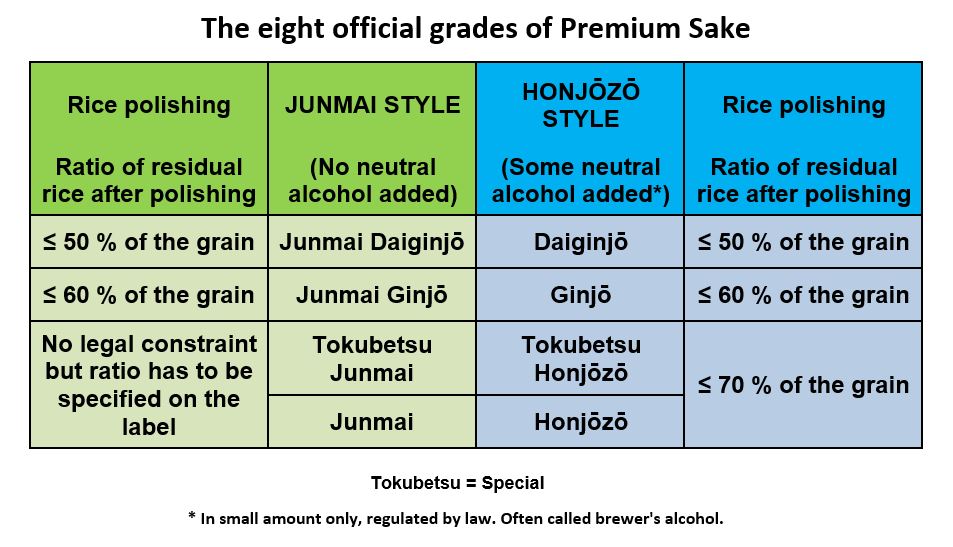 Each of the two groups matches a different style: ”junmai style” (in green) if 100% of the alcohol comes from the fermentation of the rice; “honjōzō style” (in grey) if a little neutral alcohol is added, for technical reasons, at the end of fermentation, to capture certain highly volatile aromatic compounds.

Due to the many stages before and after the main fermentation, different aspects of sake can be adjusted. Some of these characteristics are reflected in the name of the type of sake and are usually not connected to whether it belongs to one of the 8 official grades. The name of the category is appended with, for example, one or more of the following details: nigori (cloudy sake because it is filtered more or less roughly), sparkling sake, nama (unpasteurised sake), kimoto or yamahai (sakes with more pronounced flavours due to use of a traditional yeast starter method), koshu or jukusei-shu (sakes that have been matured for over 3 years), etc.

About the author – Sylvain Huet

Sylvain Huet has been passionate about Japanese culture for many years and shares his passion for sake with as many people as possible by sweeping away preconceived ideas about the drink. In 2017 he was featured in cultural programmes on ARTE and on the Japanese national television NHK, which devoted a topic to him in its newscast. He is Sake Samuraï, founder of l’Académie du Saké, owner and managing director of Salon du Saké.