The Hyogo Department, often referred to as “Model Japan”, stretches from the Sea of Japan to the Inland Sea. Its mountainous region stretches from east to west in its central part. It is located in the Kansai region, bordering Kyoto and Osaka Prefectures, with which it forms an important metropolis on a global scale.

Hyogo Prefecture comprises 5 regions: Arima, Awaji, Kobe, Tajima, and Tamba, each of them with its own culture and traditions, the legacy of a rich historical past. Hyogo Prefecture is known for its tourist sites and spas. The diversity of its agriculture has also allowed it to develop many popular culinary specialties.

Hyogo prefecture accounts for approximately 30% of domestic sake production and is known as the No. 1 site for sake in Japan, due to the local water and quality of its rice for making sake, along with skills and traditions that have been passed down from generation to generation.

Amongst over 100 different kinds, Yamada Nishiki has been the king of sake rice for 80 years, ever since its advent. Produced most notably in Hyogo, Yamada Nishiki is regarded as special, blessed with day/night temperature differences specific to the area and other unique factors.

“Yamada Nishiki” is a must for making Daiginjoshu and Ginjoshu.

Kobe is the seventh-largest city in Japan and the capital city of Hyogo Prefecture. It is located on the southern side of the main island of Honshū, on the north shore of Osaka Bay and about 30 km west of Osaka. With a population around 1.5 million, the city is part of the Keihanshin metropolitan area along with Osaka and Kyoto.

Known as a big city and a port town, Kobe has been accepting people from overseas for a long time. Western-style building of Kitano Ijinkan street and Former Foreign Settlement color the town. Also known as center of fashion, shopping in Kobe is recommended too. Night view from Mt. Rokko is called “Ten million‐dollar view by night”. In Hanshin area between Kobe and Osaka, there are Takarazuka Revue and Hanshin Koshien Stadium where you can enjoy various kinds of entertainment.

Kobe is one of the most famous place for Sake brewing in Japan, and it is dotted with historical Sake breweries.

Kobe Beef is one of the three major Wagyu beef brands, praised highly by gourmets all over the world. Only a few selected carefully from famous Tajima Beef can call Kobe Beef. 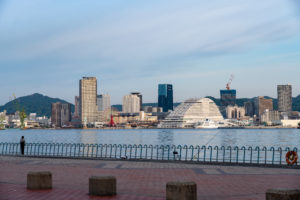